Our leadership consists of:

Collin is originally from North Carolina, growing up in Lexington and spending college and his early adult years in Salisbury. He has a degree in Music with a concentration in Popular Music and Worship Arts from Catawba College, and is currently getting his Masters of Divinity from Western Seminary. He and his wife Beth have been married since July of 2017, and their son Burke just turned 2.

By day, Collin is a teacher at Washington Academy and High School in Princess Anne, where he teaches both marching and symphonic band, as well as musical theater. Before moving to Princess Anne in the fall of 2020, Collin had worked at a local church in North Carolina for 5 years, serving as Worship Director, Student Director, and College Director in different capacities. His favorite part of church work has always been the people, building relationships and enjoying living life with those in the community.

Collin loves a good fantasy book, coffee shops with friends, and going to the movies. Together, Collin and Beth enjoy The Great British Baking Show, trying different restaurants around town, and the occasional trip out of town to Williamsburg, Richmond, or anywhere cool. Burke loves anything involving tractors, trucks, planes and trains, and he especially loves Halloween and anything spooky (the next time you see him, try saying “spooky pumpkins” and see what happens).

At TRP, Collin serves as Worship Leader, which includes planning, organizing, and leading music for services together, as well as planning and dreaming with the rest of the gang about whatever God is up to next. 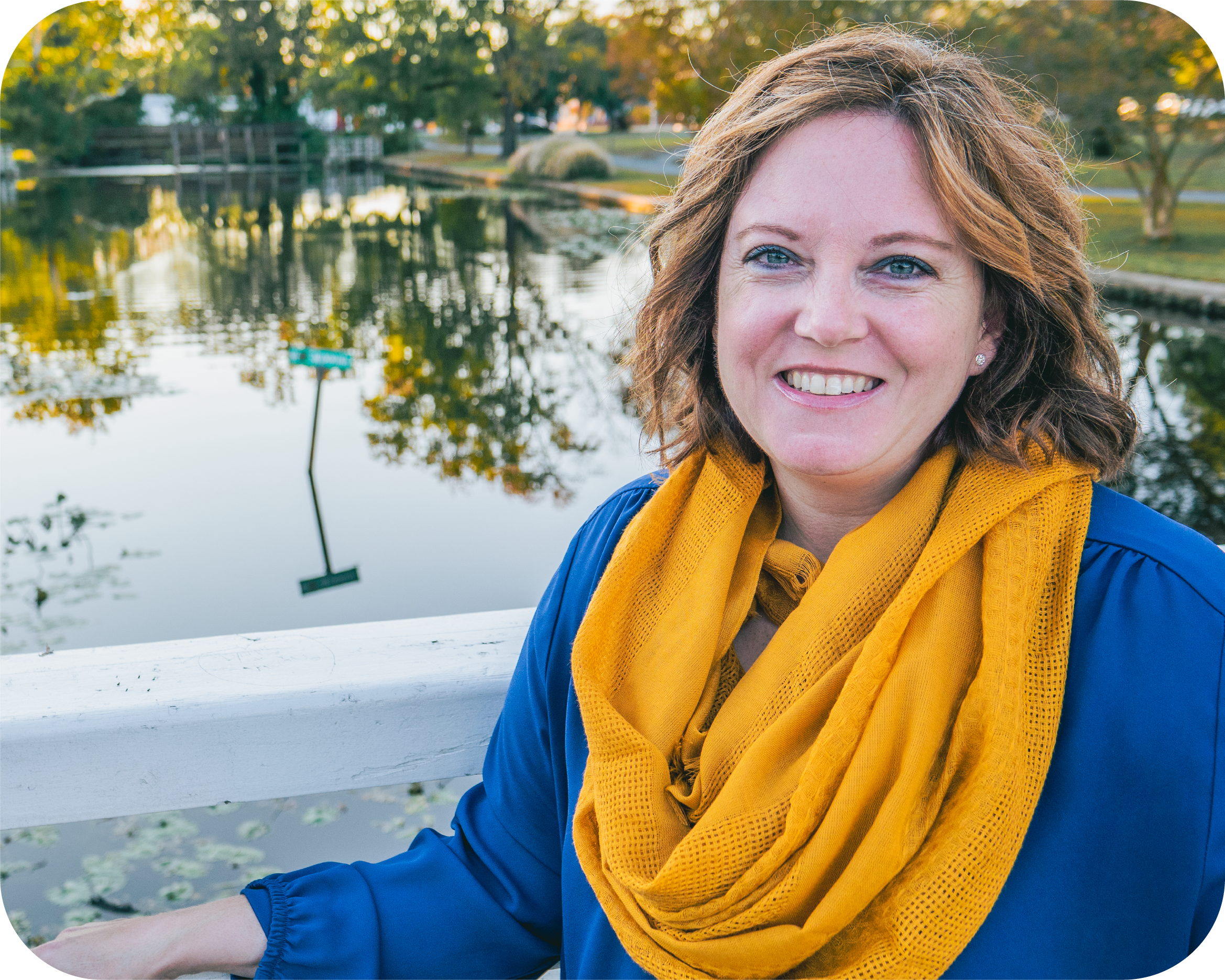 Christi is a transplant from Pennsylvania (affectionately known as “The Homeland”) and likes to get back there as often as she can. She is a graduate of Lancaster Bible College where she holds a Bachelor’s degree in Biblical Counseling. She is currently working toward Enneagram teaching certification and will soon begin Master’s work in Clinical Mental Health Counseling. Christi loves daytrips, podcasts, sports radio, reading books (usually 3-4 at a time), the Phillies and Eagles, the Enneagram, and feeding people. She loves to cook and bake equally and collects recipes that contribute to her Asian-Mennonite-Tex/Mex fusion-style cooking. Christi is an Enneagram 6 and is happy to talk with you further if you’re into shadow self, contemplative prayer, personality and temperament, and why you are the way you are (you know, light, easy-breezy conversation.) She and Josh (a firefighter/paramedic and free lance sign language interpreter) have been married for almost 25 years. They’re parents to college students Luke and Nathan who are wonderful and complex and so very different from each other, and also super tall.

Amanda is both a social worker and an academic. As an assistant professor at SU, she is passionate about teaching her students the values and skills necessary to be effective professional helpers who bring about change at the personal and community level. Amanda has enjoyed being a part of the TRP community since the beginning and had the privilege of joining the elder team in early 2020. In her free time, she enjoys spending time with friends, watching TV, listening to podcasts and audiobooks, and she rarely turns down a cocktail. Amanda and her husband Josh have been married for over 11 years and very much love their two loud and needy dogs. Josh (PhD, Fuller Theological Seminary) is one of the founding pastors of TRP. His primary responsibility is teaching and dreaming up stuff. If you attend, chances are you’ll find him leading the nerdy discussion on a Sunday evening and maybe projecting some of his social awkwardness. He also teaches seminary courses at a couple of institutions (sometimes offering them to the fine folks of TRP for fun) and has written a couple of books.

Josh is married to Kate. She’s a badass trainer and coach for recreational runners and ultra-marathoners and triathletes. They like to run together and watch copious amounts of streamed television on Netflix, HBOMax, Amazon, and Hulu. They also appreciate a good meal at Our Harvest (Fenwick) or Bombay Social (Cambridge) and a good drink at Dewey Beer (Harbeson, DE). Together, they have two young gentlemen, Abram (7) and Jude (5), and a gentledog, Porter (age unknown). Abe and Jude are appropriately energetic and filled with love for a bunch of random stuff from airplanes to baseball to old school Nintendo to Pokémon.

Laura joined TRP when it was 6 weeks old and has been hanging around ever since. She married her high school sweetheart, Evan, 16 years ago. Laura and Evan live in Laurel, Delaware and they have two boys, Jack and Shepard, and a giant dog named Harley. Laura has a BA in Psychology from University of Valley Forge in Phoenixville, PA. If Laura isn't at work, it's a safe bet she's doing one of the following things- reading, watching historical documentaries with Evan or folding laundry. Folding laundry isn't a favorite pastime, but Laura's children feel the need to use all the towels and wear 4+ ensembles each day. Evan is a local police officer and served 8 years in the United States Marine Corps. He's really, really handsome and Laura enjoys looking at him and holding his hand. If Laura could be any place in the world, it would be the beach. Alone. With a good book and an icy, glass bottle Coke made in Mexico, because real sugar is better than corn syrup. Always. The stigma often associated with mental health disorders is a major concern of Laura's. The Church needs to be a place where honest, open discussion concerning depression and anxiety can happen without fear of rejection or judgement from God's people. Her responsibilities at TRP are widespread. She has been a part of the leadership team and is currently serving as an elder of TRP. She loves leading small groups where she is able to care for and foster relationships with many in our community. Pre-Covid, her husband Tracy never knew when a large group of people will be appearing at their doorstep. She also plans a pretty mean party, so any dinner or get together that we have, Suzi is probably the one organizing it. For the last six years, Suzi has been helping TRP go beyond our walls and into the community with the creation of Summer Lunch at the Garden. She’s passionate about discovering the needs in our city and leading folks to meet them effectively.

Suzi’s favorite place to be is, without a doubt, the beach. She has no problem sunning herself for ten hours at a time. (Her dermatologist protests.) Her TV habit has been crushed by said seminary, but she loves to fit some serial killer documentaries in when she can. She also loves a good podcast which she listens to as she goes to sleep. Speaking of sleep, Suzi has been told she has the sleep patterns of a teenage boy, easily sleeping ten or eleven hours if allowed.  She has been married to Tracy for almost 25 years. Together, they are parents to three uniquely amazing adult kids – Dori, Chloe, and Noah. She has two dogs, Luka and Harry. Harry (who is hairless) is helping her cope with empty nest syndrome (it’s a real thing, folks).

Tessa hates writing bios. Mostly because it's impossible to describe the whole of oneself in a blurb. As an enneagram 4, she's afraid of being misunderstood and therefore avoids writing bios at all costs. But here we are.

A self-described "content machine", Tessa enjoys all things creative; writing and playing music, painting, drawing, graphic design, videography, redoing furniture. She hopes to one day put all this creative energy into a house, but for now she lives downtown in a third floor apartment with her dog, Novie, and her bunny, Eubie.

On her to-do list are: be a mascot for a day, do at least one set of stand up, write and illustrate a children's book, paint a mural on a large outdoor wall, and record and release an album. She's been a part of trp since 2013 and has been working with trp since 2015 as a media director of sorts, putting her BFA to good use in all of their graphic design, videos, music, etc. She also uses these mediums in her job with The Bible for Normal People as a creative director.

When she's not doing either of these, she's either seeking out freelance work, watching Gilmore Girls or Schitt's Creek (AGAIN), or taking 5 mile walks around Salisbury. She's also been known to check out several DVDs from the library at a time and sit down for solo movie marathons.

She loves a coffee, beer, or gin drink, conversing, laughing, and storytelling with friends, or sitting down for a meal with community. 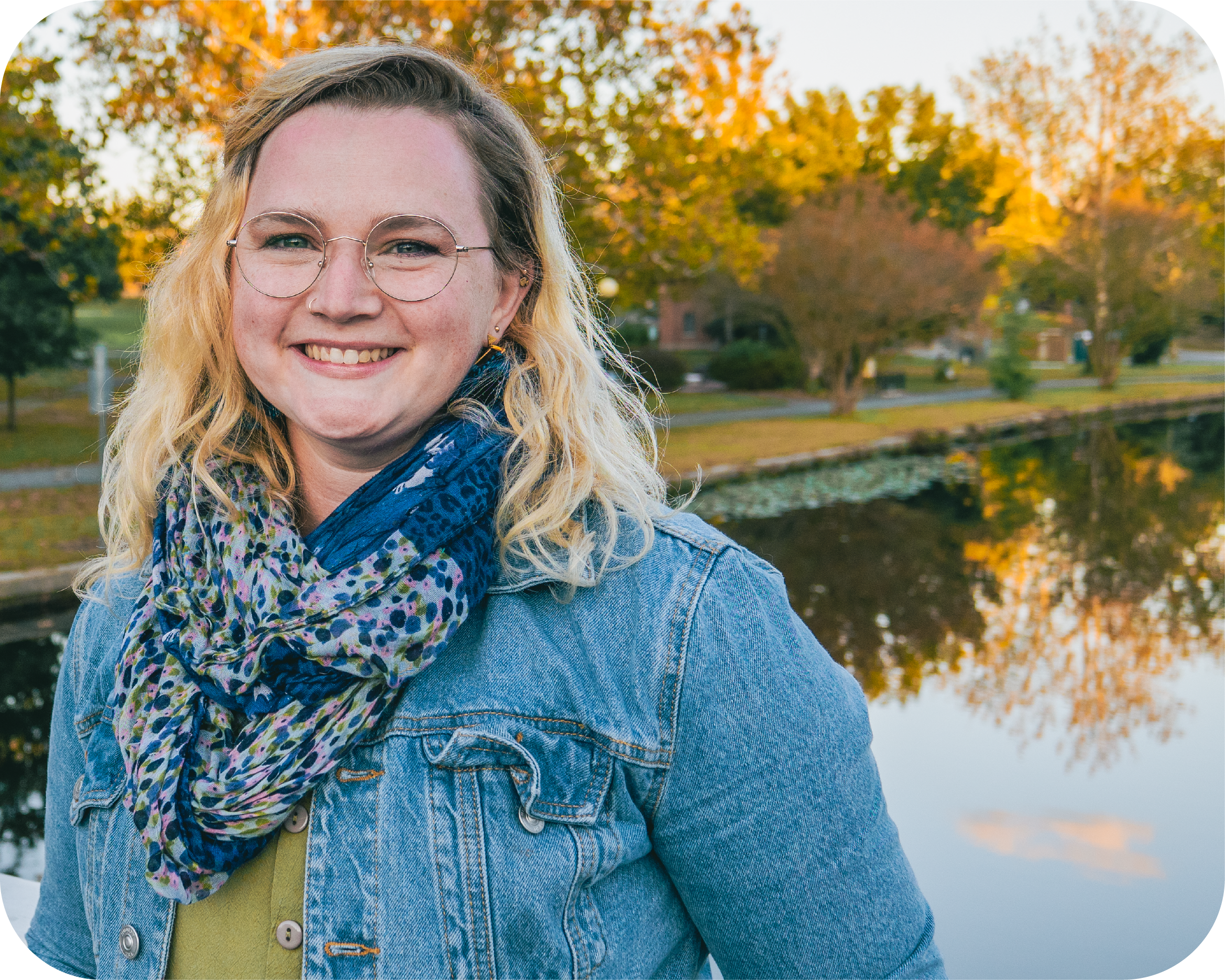